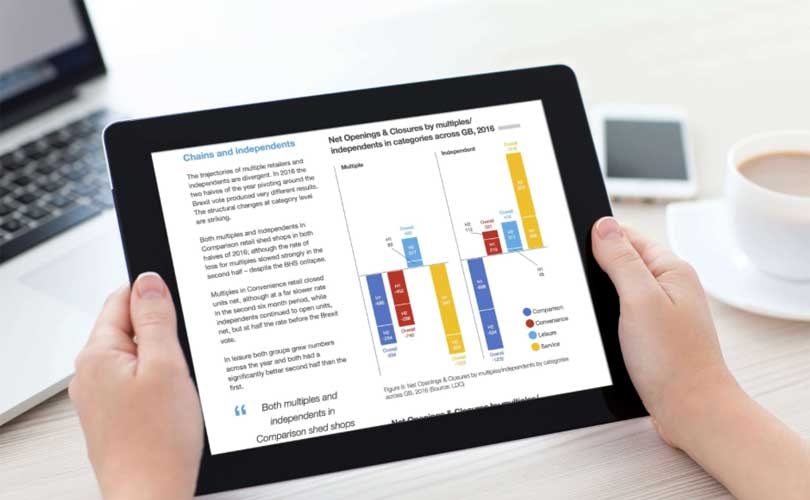 The UK remains a nation of shopkeepers

The UK is still a nation of shopkeepers, according to research from the Local Data Company (LDC) and British Independent Retailers Associations (Bira).

Their findings show traditional independent retailers opened more shops than they closed in 2016 across Great Britain's 500 town centres. Whilst the national chains continued to see a fall, independent shops saw an increase of 159 shops (15 percent) in 2016. This equates to a 36 percent increase from 2015, where 117 shops were added across GB.

The East Midlands showed the greatest increase of independents at 87 units, up 1.19 percent in 2016, whereas Greater London saw the greatest decline at -154 units, down 48 percent.

Matthew Hopkinson, Director at the Local Data Company commented: “Independents are becoming ever more important to our High Streets. Year by year, the net gain of small businesses is accelerating, even as the net loss of chain stores increases. They are changing the face of our towns as well, as Barbers and Bars replace Clothing shops and Newsagents, with Service and Leisure gradually substituting for Comparison shops.

Not all towns, or even regions, are benefiting from that growth, though. The East, South East and South West of England saw a fall in the numbers of independents in 2016. None, though, saw as big a fall as Greater London, with its rising rents. That challenge is to be amplified over the next five years by rising rates bills as well.”

He added: “The high levels of openings and closures among independents must be seen as a sign of continued buoyancy in our towns. But there is no room for complacency – with a gain on balance of just 159 shops on the back of more than 29,000 openings in 2016, it would take very little for net gains to become net losses.”

Alan Hawkins, CEO, British Independent Retailers Association (Bira), said: “It’s good to have some positive news at last, especially in Scotland. It’s clear that the real winners are those areas where the customer has to be present such as hair and beauty. Service, Leisure and Convenience stores all showed good positive net openings with only Comparison shops doing worse. The truth that most bira members are in this oddly named category is an issue we and our members are working hard to redress.

Given that there are over 100,000 independents in the top 500 towns, this is news to celebrate, as is that 65 percent of all retail and leisure outlets are independents. The fact that net growth is still in the low hundreds means no letup in our effort to convince government that support is needed. Without them it would be a much emptier exchequer. The next few LDC surveys will make interesting reading as the government has failed to deliver the fundamental rates reform we were looking for and we expect some economic realities to hit home.”

LDC is the UK’s leading data creator using real people on the street to acquire the most up to date, on demand location and company specific data for the retail and leisure sectors.

The British Independent Retailers Association (bira) is the voice of independent retailers to help them trade more effectively, profitably and sustainably for the future.