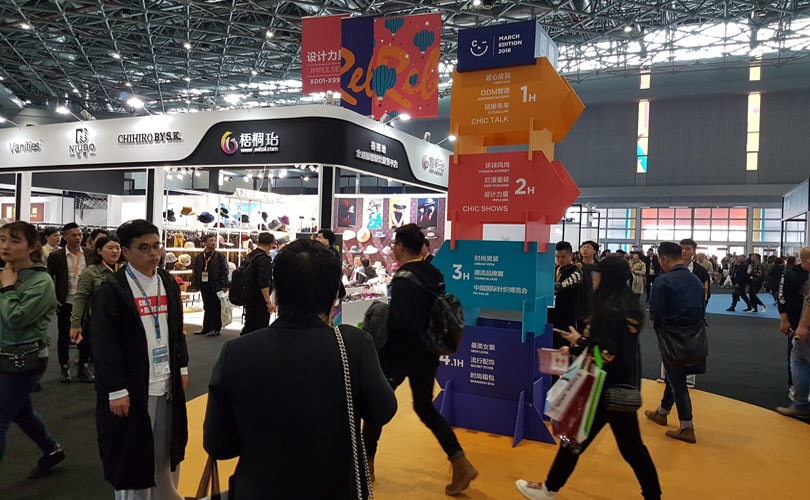 Opportunities & obstacles for fashion companies looking to do business in China

A visit to fashion fair Chic in Shanghai is an overwhelming experience. Everything is big and hard - from the four hundred thousand square metre exhibition floor, to the hermetically closed off pavilions with droves of people waiting in front of them, the huge language barrier, the more than 1200 exhibitors, the staggering amount of a hundred thousand visitors and the pumping music which blares at you at every stall - it is astounding.

Then a conversation, with the help of an interpreter, goes something like this:

Anyone looking for opportunities in this market must have their feet planted firmly on the ground so that they do not immediately jump on a plane home when they hear such vast numbers. Western clothing brands are still held in high regard in China, says Chen Dapeng, manager of Chic Shanghai and executive vice-president of China National Garment Association. “This is their advantage over local labels.” However, the Chinese often find the western brands from the middle segment far too expensive. 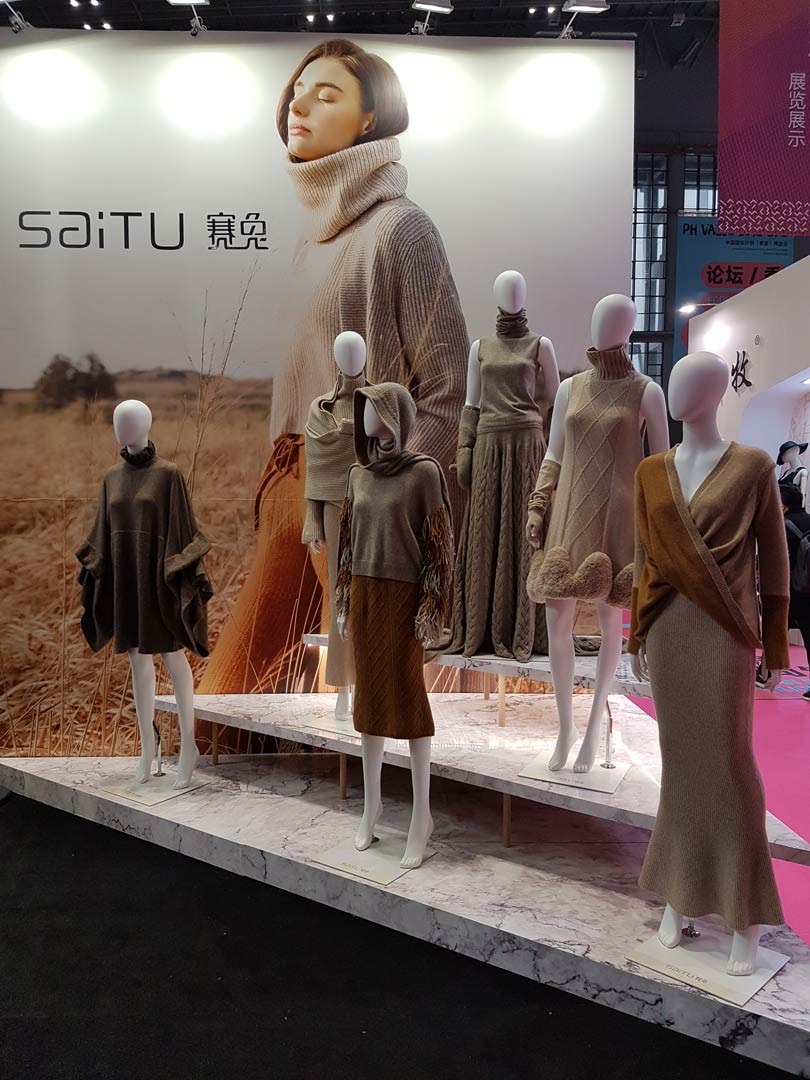 The Chinese consumer has more money to spend than they did five years ago, but he is careful with his spending. Local products are good and often much cheaper than what is imported from far away Europe. In addition, the offer has grown exponentially within a short time. Chinese clothing manufacturers have adapted their business models and have set up their own labels in addition to their production activities. They are able to leverage the knowledge they have gained over the past few decades producing apparel for western companies to create their own in-house brands. New, local brands are no longer seen as inferior to labels from the west in regards to quality, design, and fit. Or as Chen Dapeng puts it: “There is no good brand without good production.”

Take the young Chinese brand Wemely which exhibited this season at Chic Shanghai. Wemely offers a complete apparel collection for ladies and during Chic it presented a line with long, supple, ladies’ coats of high-quality cashmere in beautifully muted colours. At first glance, Wemely could easily be compared to a brand like Max Mara. The difference is that the Italian Max Mara is an iconic name, even in China, with the related heavy price tag. Wemely's coats, on the other hand, are sold online via Tmall for less than 400 euro. Upon request, again with the aid of an interpreter, the representative of Wemely explains that the brand is not just looking for new retail customers at the fair. By presenting its new in-house collection, the manufacturer behind Wemely is also showing its expertise in order to attract new customers for its production capabilities. The production and own label activities of Chinese companies enhance each other. 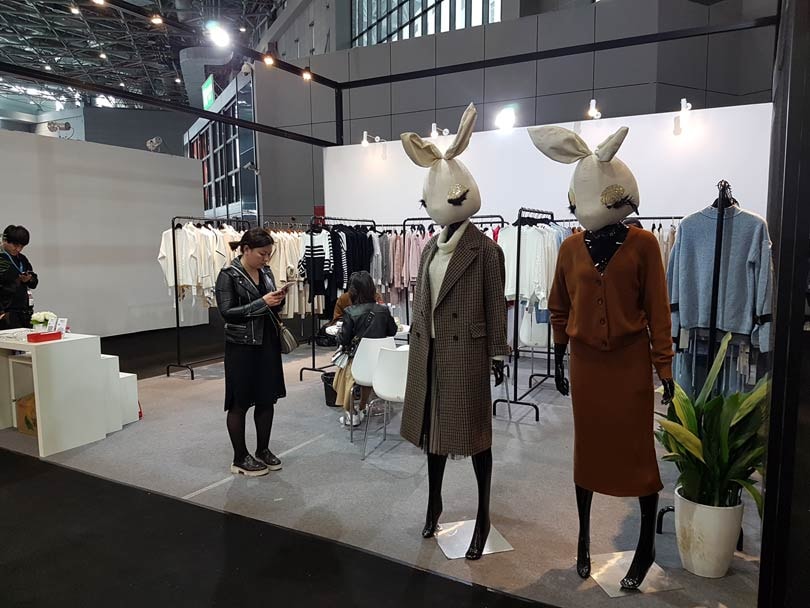 Own brands and own stores

Western players, in search of wholesale customers come across another new phenomenon in China: multibrand retail, in Europe synonymous with a unique brand mix curated by a well-informed independent entrepreneur, has developed very differently in the country. Here, the Chinese manufacturers have opened ‘multibrand’ shops where they offer their own brands for sale. With the aid of investors, successful multibrand store concepts are then rolled out on a large scale, resulting in hundreds of similar multibrand stores.

The question remains what do Western fashion companies aim to achieve in China. The number of 9000 stores previously mentioned above initially sounds bizarre and cannot be immediately verified by a foreign journalist, but with a total population of 1.4 billion - the city of Shanghai has a total population of 25 million people alone - it is slightly easier to imagine. The manufacturer in question, Semir Garment Co., now has twelve brands in various segments such as Gson for men and Balabala for children. With regards to size, Semir can be compared to the Spanish Inditex group which, with eight brands, has about 7500 shops worldwide. “However”, says Chen Dapeng, “the collective market value of the hundred largest Chinese clothing companies listed on the stock exchange of Shanghai is only twice as high as that of Inditex.”

Yet a Western brand does not need to think in terms of such numbers in order to be successful in China. Rose Chen, sales manager of the luxurious Italian shoe brand Spernanzoni, says: “Spernanzoni only has a handful of sales outlets in China, but the brand is for sale in the best shops such as SKP in Peking and Lafayette in Shanghai. We sell considerable volumes there and China, along with Russia, is the most important growth market for the brand.” In homeland Italy and in Europe Spernanzoni is barely growing. The second, lower-priced brand Il Gerco is more successful there.

Birgit Rieker, CEO of the well-known German lingerie brand Escora, has a stall with the brand for the first time in Chic Shanghai and is doing this - as she puts it herself - ‘with an open mind’. “Escora is already sold in China, we have retail customers here, but they bought the products at the lingerie fair in Paris.” Rieker has an opt-out: “I have the feeling that China exports more than it imports at present and I can imagine that the Chinese retailer may find our brand to be too expensive."

“The Western lifestyle is still appealing to Chinese consumers”, says Chic Shanghai manager Chen Dapeng. “In the past, European exhibitors sometimes complained to the fair organizers that they did not obtain enough orders at the fair, but I think that companies that want to be successful in the Chinese market must take a more flexible attitude. By not sticking to a minimum number of orders, for instance.” He is also a supporter of collaboration with local companies. However, Chen Dapeng also observes a change in the market. “The interest amongst Chinese consumers for local products is growing and the second generation of manufacturers is starting to realize a radical turnaround. They study in Europe and later return to China in order to further improve the factories of their parents and the resulting collections.” In five years, this market will have changed radically once again”.

FashionUnited was invited by the organisation to visit Chic Shanghai

All the photos: FashionUnited