Not many consumers stop to ask the question where the leather for their new belt or handbag came from, which raises numerous issues concerning the traceability of the product. Although the majority of the population knows that leather comes from the skin of a dead animal, most leather products do not specific which animal the items is made from and where it came from. In a new short video, named ‘Labels’ created by animal rights organisation PETA and Catsnake Studio, eight year old Rebecca, makes it a point to find out where leather comes from. “For the past three decades, PETA and other animal rights organisations have worked to educate the public about horrific cruelty of the fur industry – and our efforts have paid off. Today, 95 percent of British consumers won’t wear real fur, according to a recent TNS poll," explained Sasha Camilli, PR for PETA UK to FashionUnited. “Our goal is now to move the conversation forward to include other, equally cruel but less discussed, uses of animal skins in fashion. That’s why we recently produced a new video that softly highlights the lack of transparency in the leather industry. We want to open consumers’ eyes to the fact that there’s no way to really know whose skin you’re in or how those animals were treated before they were turned into shoes, bags, or belts.”

‘Labels - do you know what you’re wearing?’

The short film, which is a world away from PETA’s usual bloody, undercover exposes, depicts Rebecca and her friends discovering the truth behind the leather industry - they can just as easily be made from cat and dog skins as they can from cows and pigs skins without proper traceability within the supply chain. As there is currently no law making it compulsory for companies to label which animals their products are made from, consumers have little way of knowing which skin they are purchasing. “As this is a consumer issue, we wanted to portray the frustrating reality of being unable to know which animal you’re wearing – this eight-year-old girl is curious and wants answers, like children often do, and her being unable to find them reflects the lack of traceability within the leather industry,” added Camili.

With the main bulk of the world’s leather coming from developing countries such as Bangladesh, India and China, which lack laws concerning animal welfare, PETA stresses that many suffer the horrors of factory farming before death, which include intensive confinement in squalid pens, castration without pain relief, ‘death marches’ and chronic disease. The animal right’s organisation also highlights the environmental toll the leather industry has, as well as the human toll. The tanning process of hides involves mineral salts, formaldehyde, coal-tar derivatives, cyanide-based dyes and other dangerous substances, which are often dumped into rivers and nearby fields that in turn causes water and soil pollution that affects the health of local communities. 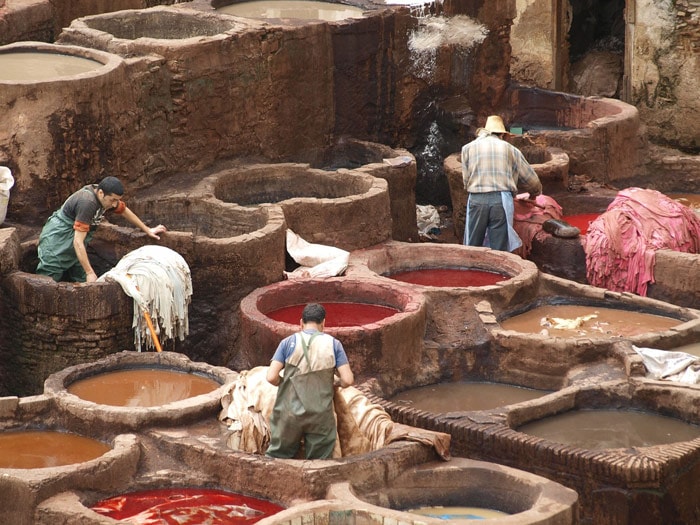 “Investigations into the leather trade in Bangladesh and India have found workers – some as young as 10 – standing barefoot in toxic chromium effluent and handling cancer-causing acids and bleaches without adequate safety equipment,” commented PETA UK in a press release. “Unsurprisingly, a huge percentage of these tannery workers die before they’re 50.” As one of the world’s most toxic industries PETA hopes its latest film will not only highlight the issues with the leather industry, but also encourage consumers to invest in vegan items.