Driving sustainability: A look inside the Tommy Hilfiger denim centre

AMSTERDAM - Once the elephant in the room that nobody wanted to talk about, sustainability is now firmly at the forefront of the fashion world, with brands focusing more and more on initiatives to improve their production chains and build a greener industry. Tommy Hilfiger is no exception. Last week, the American heritage brand announced its plans for a new line of 100 percent sustainable denim, so, naturally, FashionUnited jumped at the opportunity to take a tour around the Tommy Hilfiger denim centre, located at the PVH HQ in Houthavens, Amsterdam, where the brand is pushing its sustainable denim initiative. 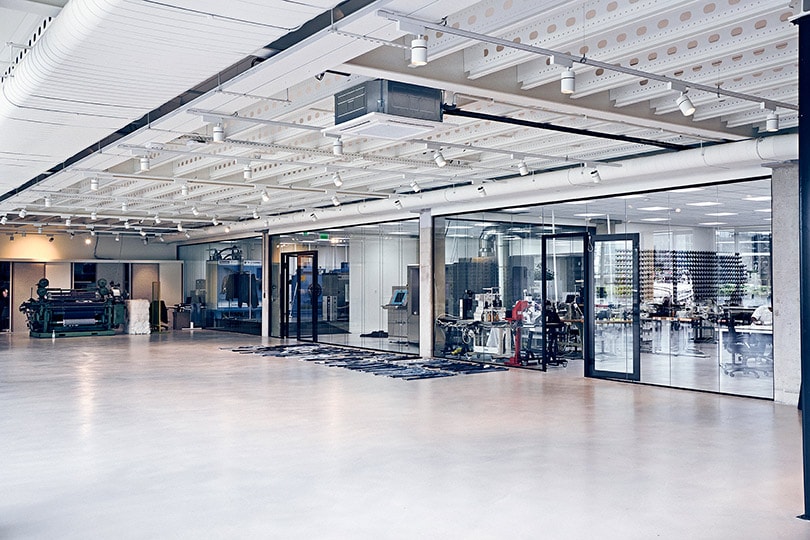 The PVH centre, which also acts as a creative hub hosting sustainability-focused denim fairs twice a year, is split into four sections: The denim fabric library, the in-house denim atelier, the denim lab and the denim academy.

“A closet to you, a treasure for us,” is the motto of the fabric library. Homing over 1,300 swatches, this section acts as a database of core fabrics for designers, wash developers and product developers, and is made up entirely of fabrics used in at least one of Tommy’s previous two seasonal collections. 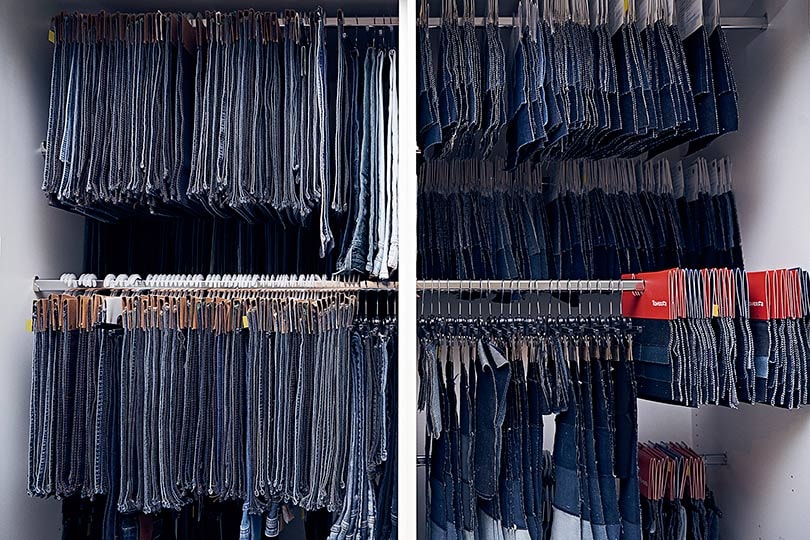 By homing the fabric library, which is carefully labeled with price, weight and width of each fabric, the need for designers, wash developers and product developers to request specific fabric swatches from suppliers is eliminated, speeding up the production process, reducing cost and cutting down on unnecessary transport. In the future, Tommy plans to convert its physical library into a digital one. 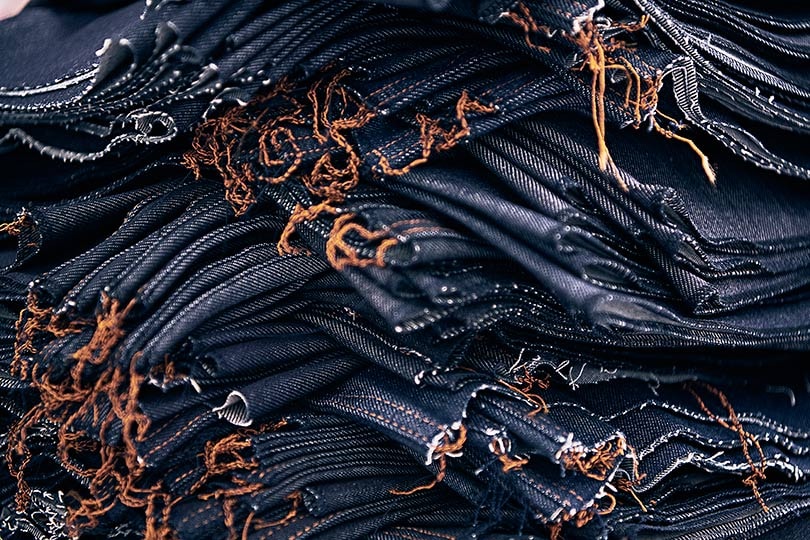 Tommy’s denim atelier is where the brand’s samples are produced and altered. While patterns were once created in-house, then sent to external vendors to create prototypes, before being sent back to try - a process which could take 4-6 weeks, and could be repeated several times if the prototype wasn’t quite right - patterns are now created digitally in-house, tried and fitted in just 48 hours. 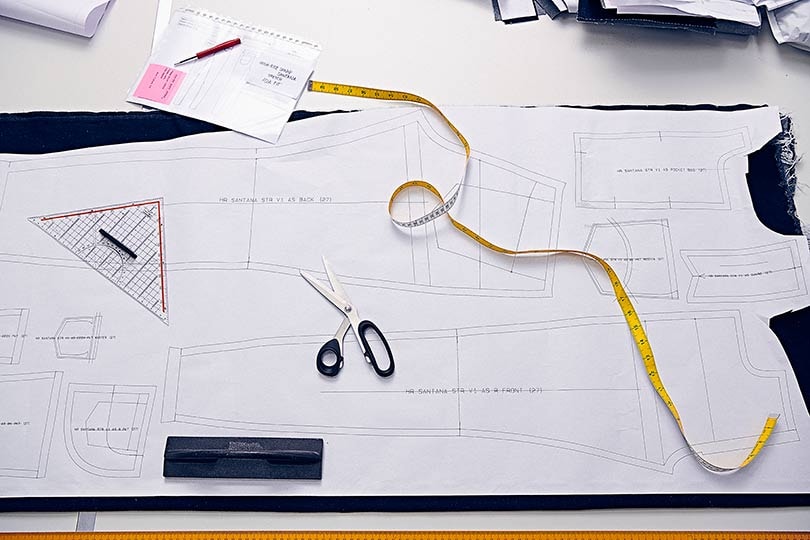 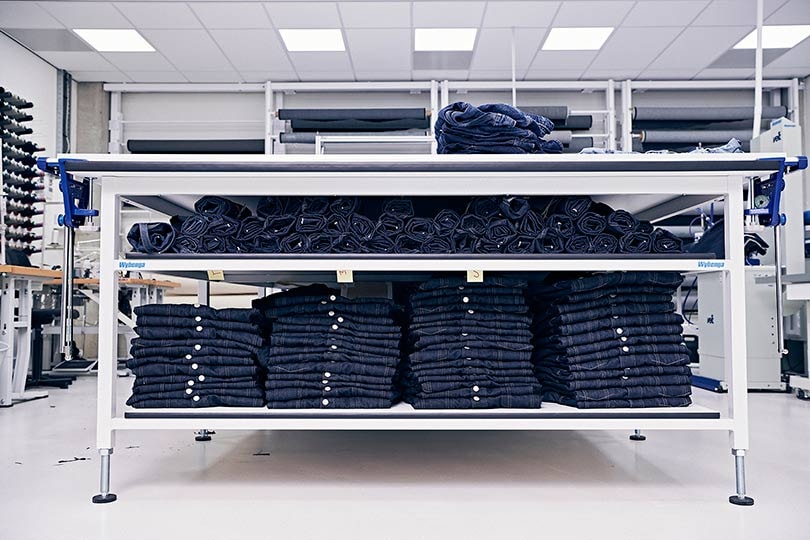 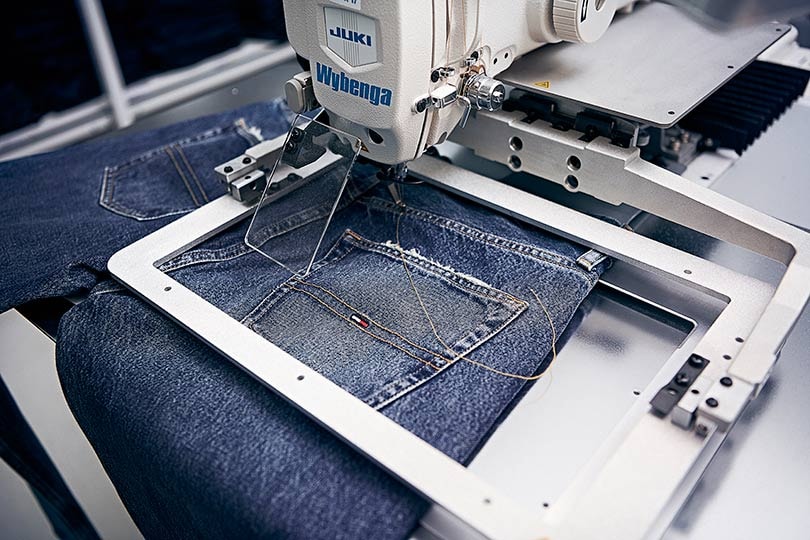 The denim lab is the driving-force behind Tommy’s sustainable production approach, with a focus on reducing water usage, energy consumption and waste products through innovative dry and wet finishing processes. Traditional hand-scraping dry techniques have been switched out for new laser technology methods. Using a computer-controlled laser to burn a mask onto jeans, the new method eliminates the use of chemicals, water and stones, and, as the process only burns the indigo dye, not the fibres, the method cuts down on harmful dust production. Tommy’s new laser technology reduces the time of the process from 40 minutes to under two minutes. 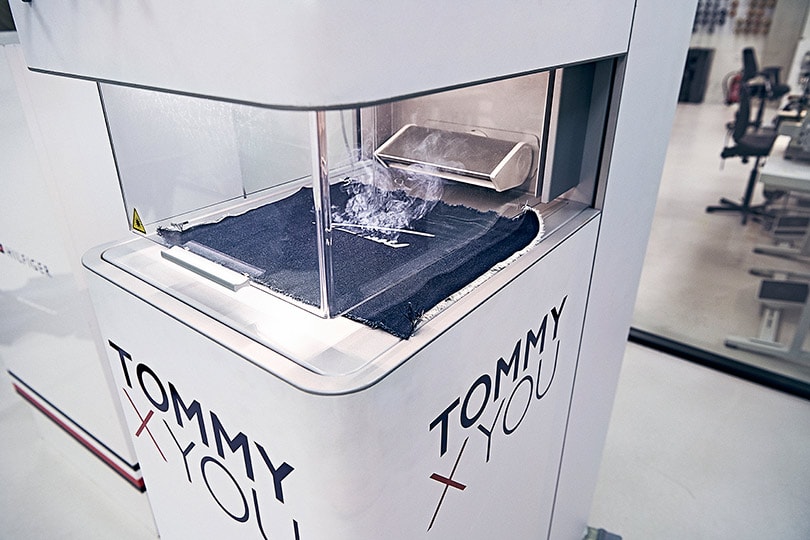 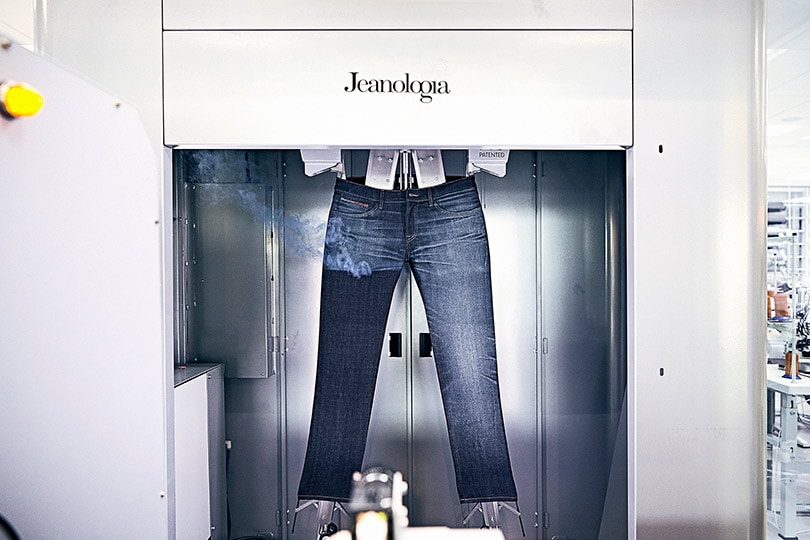 Tommy’s wet washing methods also have a strong focus on energy, water and chemical reduction. But how do they tackle the issue? Well, in a number of ways. Nebulization technology cuts down on water and chemical usage by up to 70 percent by using a spray of mist nanobubbles in the washing machine drum. Ozone gas technology saves between 15 and 60 liters of water per pair of jeans, while simultaneously cutting down on energy and chemical consumption, and reducing the traditional time of 45 minutes to just 15 minutes. 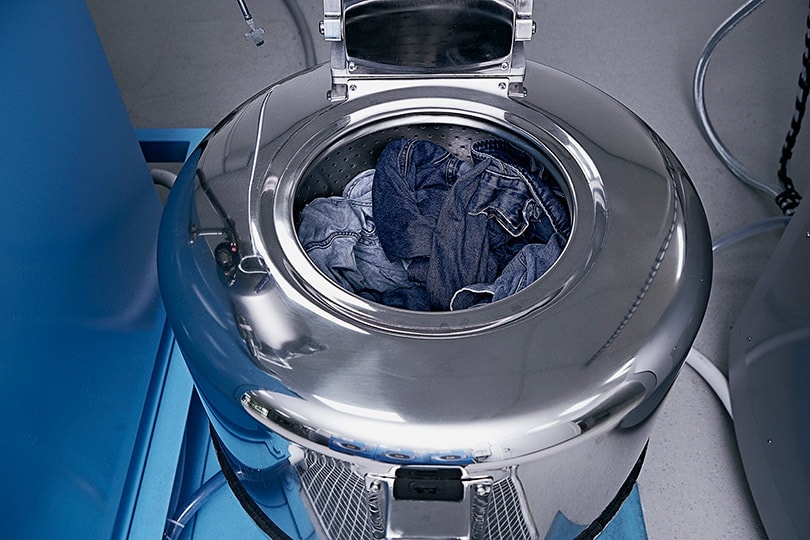 By using no-stone technology, Tommy eliminates the use of traditionally-used pumice stones to achieve stonewash looks, instead using a combination of abrasive drums and non-toxic enzymes to eliminate the production of harmful residue. Finally, water usage is further cut down through the use of Tommy’s state-of-the-art water treatment system. The machine, which removes the fibers, chemicals and indigo dye from jeans, uses recycled water that can be constantly reused over a period of 30 to 40 days, as opposed to using fresh water in every batch. Fiber residue collected from this process is then compressed and collected by other companies to produce asphalt. 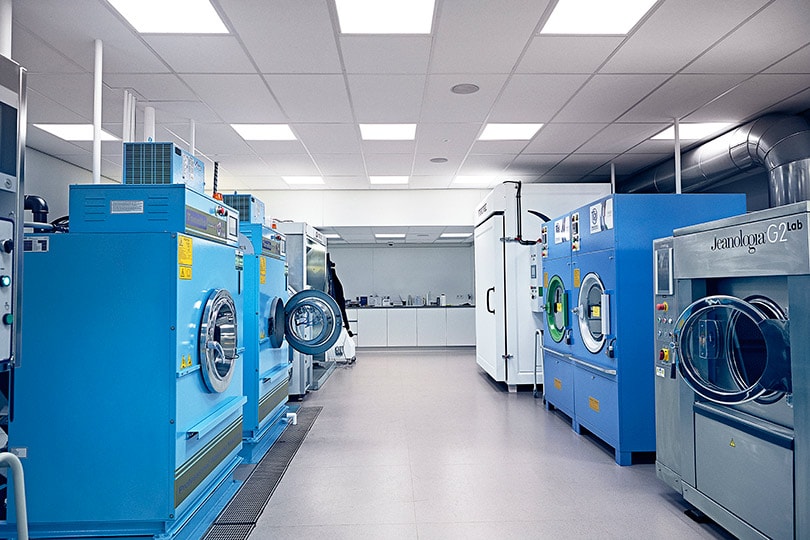 The Denim Academy is an innovative two-day workshop that Tommy hosts for its wholesale and retail teams, as well as its wholesale buyers, to talk about the future of sustainability in the fashion and denim industry. 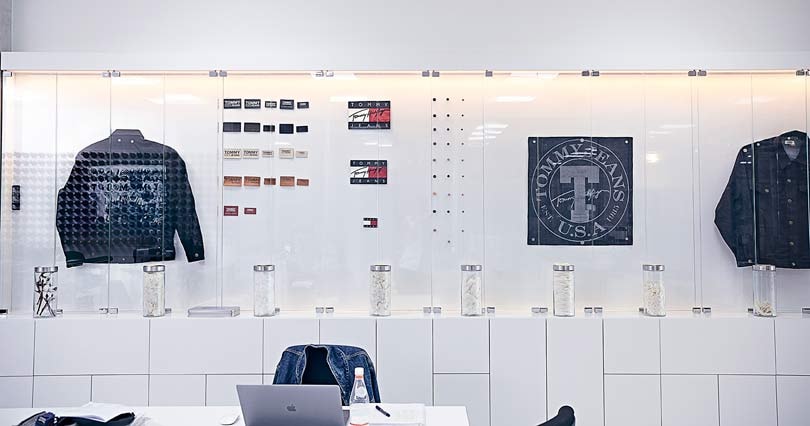 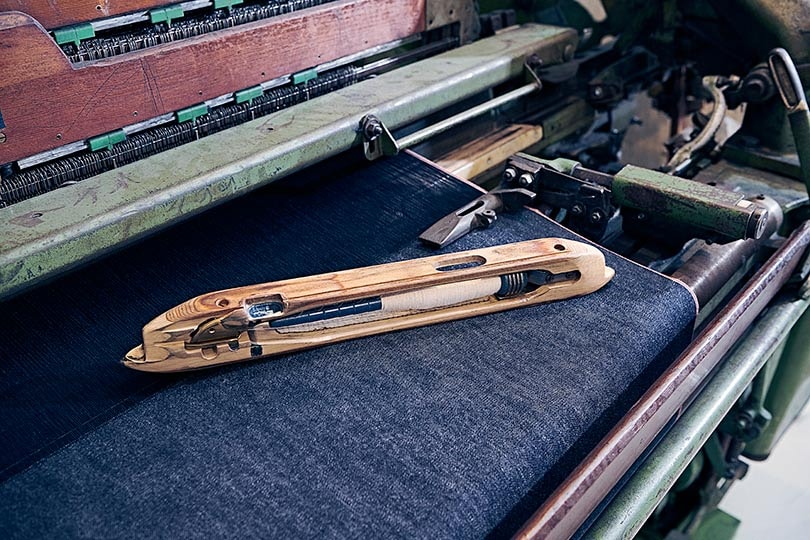 The workshop, which currently targets Tommy’s sales and retail associates, as well as key account buyers, such as El Corte Inglés and Zalando, has a focus on product stories, technology, sustainability and innovation, and participants are given the opportunity to stitch, wash and finish their own pair of jeans to better understand the processes of the production line. Over time, more departments throughout the organization will be invited to participate.