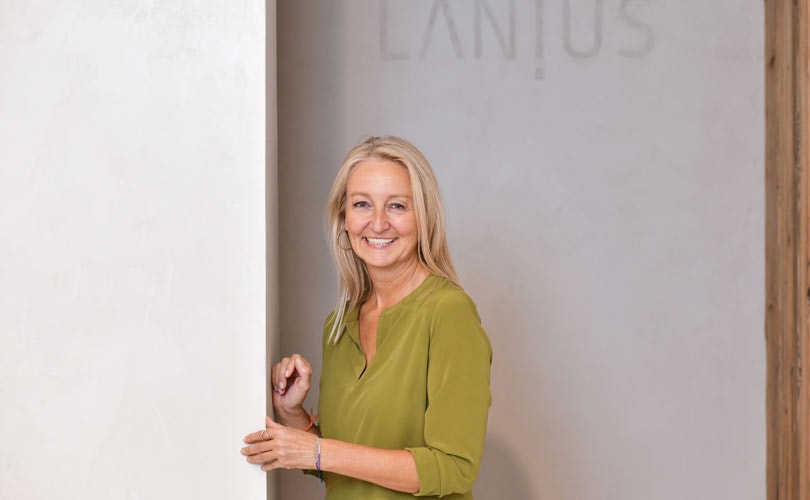 Twenty years ago, Claudia Lanius split from her husband and the joint business making hemp jeans to produce her own clothes. In the same year, the trained dressmaker founded Lanius. On the occasion of her anniversary, Claudia Lanius talks about slow growth as a sustainable fashion brand and thinks about a potential red carpet collection.

A controversial plant marks the beginning of the German fair fashion label: Most people think of drugs or ropes when they hear the word ‘hemp’. Few people know that the useful plant has been used to make clothing for thousands of years.

“I didn't even know that hemp has such a long tradition or that it is a fast-growing raw material that needs no fungicides or pesticides," says 51-year-old Claudia Lanius while sitting in her office in Cologne. She puts a bright yellow book on the table titled 'The Rediscovery of Hemp as a Crop'.

Please tab through the slideshow to learn more about Lanius’ beginning.

Through the book, she has taken an in-depth and comprehensive look at a raw material for the first time - just as she will deal with many others for her sustainable fashion. Claudia Lanius is still as meticulous today when determining her label's fashion line and stores.

What was most important for you when founding Lanius?

The early years - the first ten years - were extremely complex and very informative. During this time I built up the collection and found suppliers. That was my foundation: Finding suppliers who worked with me in offering small quantities and who had similar ideas. A supplier who only produces something for me on the side would have not been right for me.

Ten years is a long time to start a label. Does sustainability, more than anything, require time?

The slow growth of Lanius also has to do with quality. It's hard to add organic cotton or silk as product groups if one wants to go deeper into sustainability. We often have to develop fabrics or yarns ourselves because they are not available on the market today - and were certainly not ten years ago. We produced organic cotton fabrics ourselves and bought the yarns for them. I do not accept anything just because it has always been like that. What have you been doing for the last ten years?

Over the last ten years, I have built the brand by investing the money that I acquired through its organic growth. I am independent without a financier, without a group behind me. I'm not the type of person who likes to take loans that could get me into trouble later. My intention was to grow slowly and to follow with my soul and with the people who work here with me.

In the fast-moving world of fashion, 'soul' is a good keyword. The working conditions in textile factories in distant lands are often criticized; as a fair fashion label, why do you produce in China?

The very first time I was in a big factory in China where two thousand people made hemp fabrics, and the first time I saw a dormitory where people sleep on cots, I turned away, cried and said, 'I don't want any of this, it's not my world'. But then I asked myself, 'Do I turn around now and pretend I don't see it all, or do I go ahead and try to do it differently? I decided to take the second step.

Then you found Aichin, a factory in China that is now even managed by its employees…

I think it is nice to achieve something on a small scale. That's why I stayed and still produce in China today, although contrary to prevailing prejudices, it is no longer cheaper there, but rather just as expensive as in Portugal, for example. No, I am no longer there for price reasons but because I feel committed to the production site and attach great importance to many years of working together. What really moves me is to change something in the textile industry.

As a sustainable label, producing in China means compromising. What did you compromise on most?

The biggest compromise is that I have to keep the price in mind. Customers are price sensitive when it comes to fashion. I want that even people with a small purse should be able to afford fair fashion. Thus, I have to compromise on where I produce and what materials I use.

How does compromising on materials affect the clothes?

An Ne40 yarn is cheaper but an Ne60 yarn is finer and therefore more expensive. If you twist the Ne60 yarns on top of that, you can make an extremely durable t-shirt. But this t-shirt would cost at least 49 euros, whereas my goal is that it should cost only 39 euros. So you have to find a compromise. For basics, however, we have our price points, which we would like to keep in order to be able to offer as competitive prices as possible to the conventional retail.

Every now and then, I will make styles like the Longlife Blouse that use long staple yarns, which guarantee long durability. At a price of 149 euros, the blouse is much more expensive but it is selling well.

Sustainability has become a buzzword in the industry. How far has the fashion industry come?

I am one hundred percent convinced that it is no longer possible to imagine the market or people's minds without it. I also believe that the development will continue constantly in this direction, both on the part of the manufacturers as well as the customers who are constantly demanding greater transparency. Digitalization plays a role here, as it is much easier to obtain information. But we are still a long way from the mainstream. Natural textiles account for two percent of total production, which is actually nothing.

There is still little sustainable fashion for men. Would that be something for Lanius?

We are not planning a collection for men because I tell myself: ‘Cobbler, stick to your last’. We are thinking more in the direction of an 'intermediate collection' or in the winter season, we want to orient ourselves in the direction of a 'red carpet wardrobe'. I trained under Maria Lucas, a well-known costume designer. I therefore know festive fashion very well and have also received enquiries from the sector. I could then experiment more in the premium segment and bring fair fashion to the red carpet - an area without much out there.

Please click through the slideshow to see more of the autumn/winter 2019 collection.

Fashion companies like H&M and Burberry have come under fire for the destruction of unworn clothing last year. What do you do with your remaining stock?

I try not to produce too much. I'd rather be sold out than exhaust everything to the last penny. We develop faster production cycles and order more so that we don't have too much in store.

And should there be too much in one season, we photograph it again in a different look for our online shop. And that works. In the Cologne district of Sülz we also have an outlet, the 'Lanius Magazin', where the very last pieces are sold at reduced prices.

We haven’t even thrown clothes away once. Twice we donated those that were still in good condition to aid organizations in Africa.

Given the current political climate, some fashion companies participated in the political discourse last year. Could you imagine that for yourself and for Lanius?

If I had to start all over again now, I might become a politician. But I don't want to charge my brand with politics. Fashion should always be in the foreground. I have made statement t-shirts, but my credo is never to convince people with a raised forefinger. Instead, I like to show them ways through positivity that represent a good alternative.

This article was originally published on FashionUnited DE. Translated and edited by Simone Preuss.