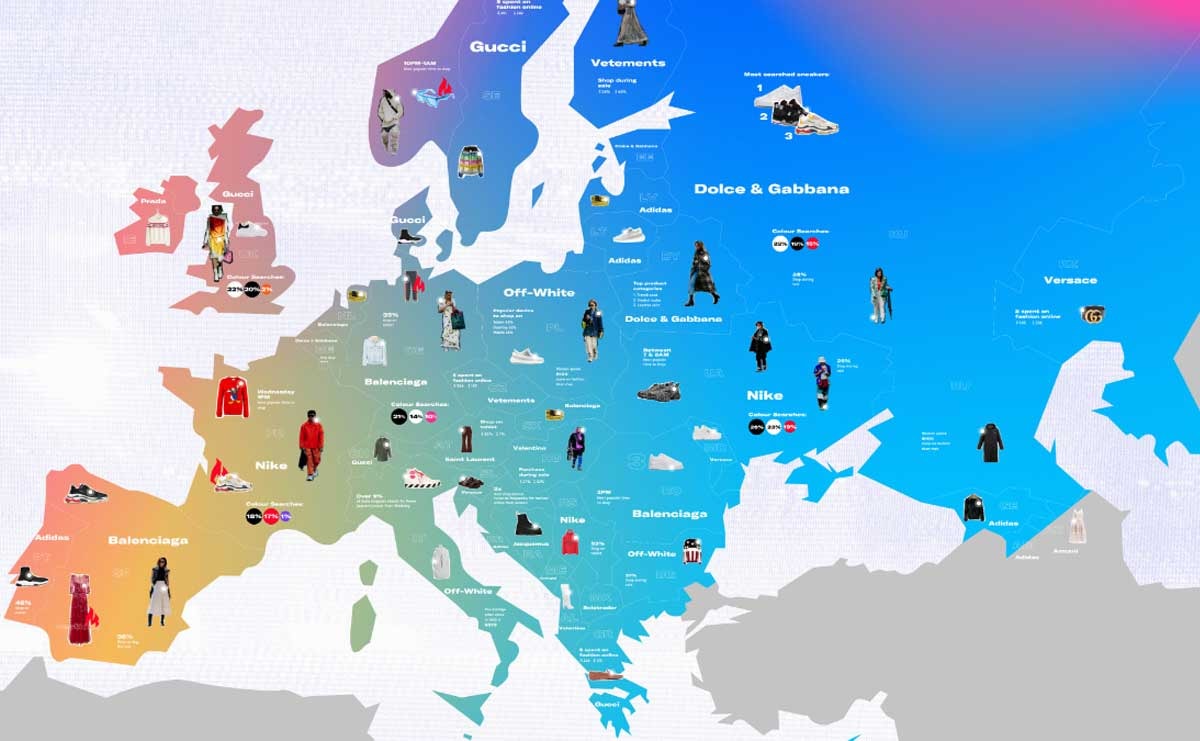 Global fashion search platform Lyst has once again put together The European Fashion Map to present the most popular fashion brands, categories, colours and the average spend in 47 European countries, along with popular timings for online shopping. Lyst’s data team analysed over 50 million visits to the site, which offers 5 million products from more than 12,000 brands, over a period of six months. Here are the results.

Discreet colours are in

While Europeans are not known to be shy when it comes to colours, in 2019, shoppers in most European countries preferred neutral tones: “In nearly every country, black and white are ranked as the top two colours,” found Lyst. There are dashes of colour though as red is the second most wanted colour in Spain and France (after white and black, respectively) and third wanted in the UK (after white and black). And while black is the top colour in Switzerland, pink, metallic and nude shades rank higher than white.

Accessories and sneakers is what Europeans shopped for most, with Off-White's Mini Industrial belt being the top item, followed by Adidas' Boost 350 v2 sneaker. In the UK, sneakers are particularly popular, with Alexander McQueen’s oversized sneakers and Off-White’s vulcanised low-top sneakers being the most wanted items. In terms of categories, jackets and dresses are the fashion categories all over Europe that get the most searches, while in Belgium, ‘wedding dresses’ is the most searched category.

Not surprisingly, sports brands are high on everyone’s list with Nike and Adidas being toppers in Portugal and France, followed by two more sports-related brands in Portugal. While Balenciaga is the most wanted brand in the Netherlands and Germany and Dolce & Gabbana in Belgium and Spain, Off-White is the most coveted brand in Italy while that honour goes to Gucci in the UK, Sweden and Denmark. “Belgium is the only European country where a local designer made it into the top three: Dries van Noten,” adds Lyst.

When it comes to shopping behaviour, namely the most popular times to shop for fashion online, there is an interesting gender difference: While women seem to reward themselves at the end of the work day at 5 pm, men tend to do the same but at the end of their day, before going to bed: “The majority of men place their orders at 11:00 pm, with ladies doing their fashion shopping during office hours (5:00 pm),” finds Lyst. Shoppers in the UK seem to prefer the comfort of their own home on a day off: They are “most likely to purchase an item on a Sunday, between 4pm and 8pm to be exact,” says Lyst.

In terms of purchase amounts, women spend more than men in almost every European country, except Italy. Here, men spend on average 307 US dollars (278 euros) while women spend 226 US dollars (205 euros). The biggest spenders sit in one of Europe’s tiniest countries though - “Monaco is the country with the highest average spend - women spend 900 US dollars(!) (around 815 euros) every time they shop at Lyst,” found the fashion search platform.

Believe it or not but not everyone seems to like a good bargain; shoppers in some countries just could not care less and are not lured by sales: Norwegians, for example, are the least likely Europeans to shop during sales (only 16 percent do so), closely followed by the Swedes, French and Germans (less than 20 percent). In comparison, 31 percent of Brits and 50 percent of Greeks and Portuguese purchase during sales periods. The Dutch are closest to the European average around 24 percent when it comes to bargain hunting.