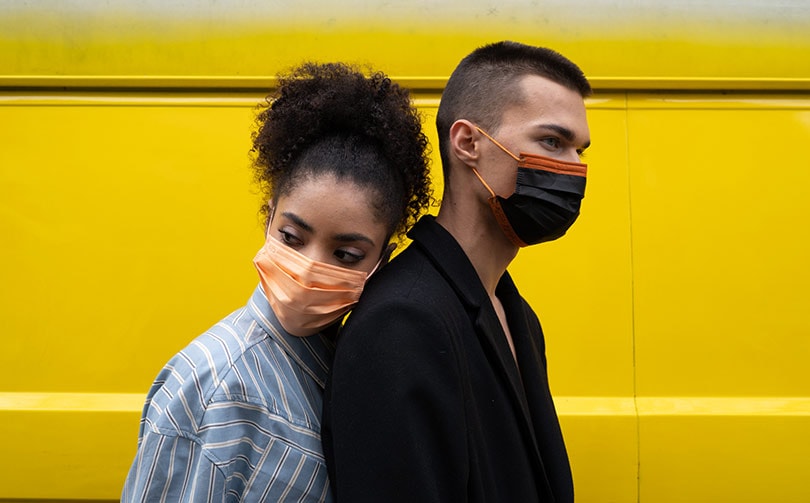 Virus and bushfires: Could medical masks become the next streetwear trend?

Berlin - 2020 has gotten off to almost an apocalyptic start. First, the Australian bushfires have drastically lowered air quality in the country resulting in a demand for anti-pollution masks. This week the Wuhan coronavirus has caused a surge in searches for medical masks on Google and several Vancouver pharmacies are selling out of masks as reported by Canadian Global News. In the 2019 “State of the Air” analysis published by The American Lung Association, it’s estimated that 133.9 million people in the United States are exposed to unhealthy air. With the unfortunate consequences of climate change and global health epidemics that’s become a stark reality, one medical supply company has teamed up with a Berlin fashion label to reinterpret surgical masks as the next streetwear trend. 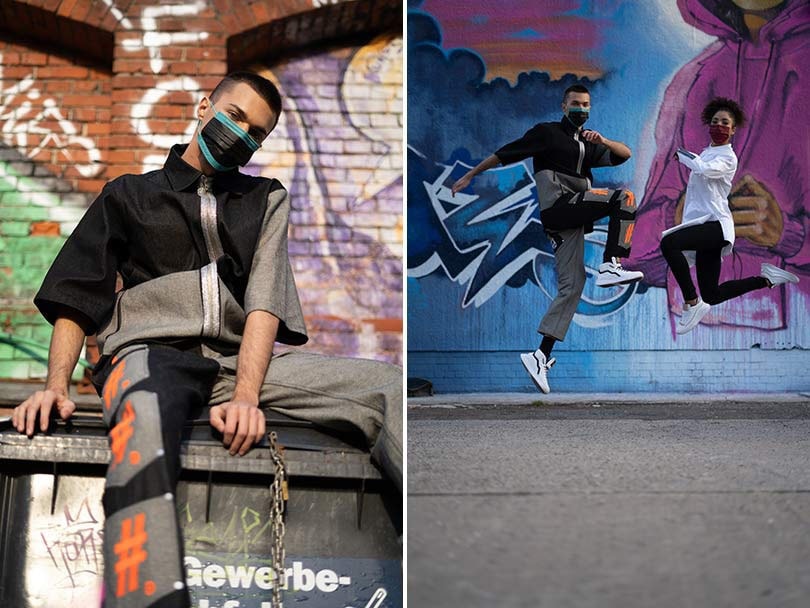 #Damur, a Berlin-based high-end streetwear label showed their AW20/21 collection at Berlin Fashion Week on January 16 at the soon to close club, Griessmuehle. For the runway show, the designer collaborated with CSD, a 73 years old medical supply company from Taiwan on a global mission to reinterpret the surgical mask in to a fashion accessory. Two special masks were used as VIP tickets and worn by models on the runway. The medical masks were adorned with renditions of the Brother's Kiss and graffiti culture that Berlin is known for. 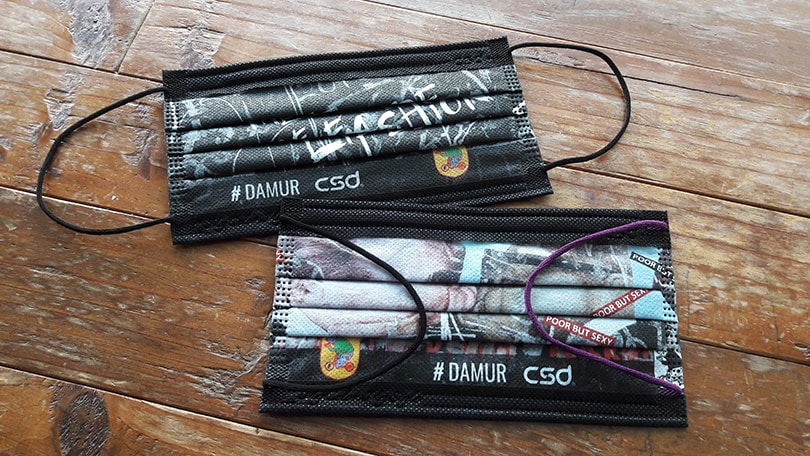 Shih-Shun Huang, #Damur’s founder and designer, told FashionUnited in an email, “We want to be the first fashion show in the world to put (medical) masks on the runway, and to use them in art installations and graffiti. CSD's method of breaking the original label of the surgical mask is very similar to that of #Damur. Many of our designs are not only fashion creations, but also hope to present a dialogue with social labels, encouraging people to think and breakthrough existing frameworks.” Damur is currently a member of Fashion Council Germany and the McKinsey experience studio so it's no surprise that the District Mayor of Neukölln, Martin Hikel, was also seen attending the fashion show.

CSD’s COO, Jonathan Chang added, “#Damur is not only a clothing brand, but more importantly, every design tries to break stereotypes in society and even attempts to redefine these labels. This is a value that CSD admires and can benefit from. In the future, I hope to collaborate with Damur at other international fashion weeks, such as New York and London. Fashion week is an optimal time to showcase our products and Berlin as a diverse international hub can be a good entry point into the European market.” 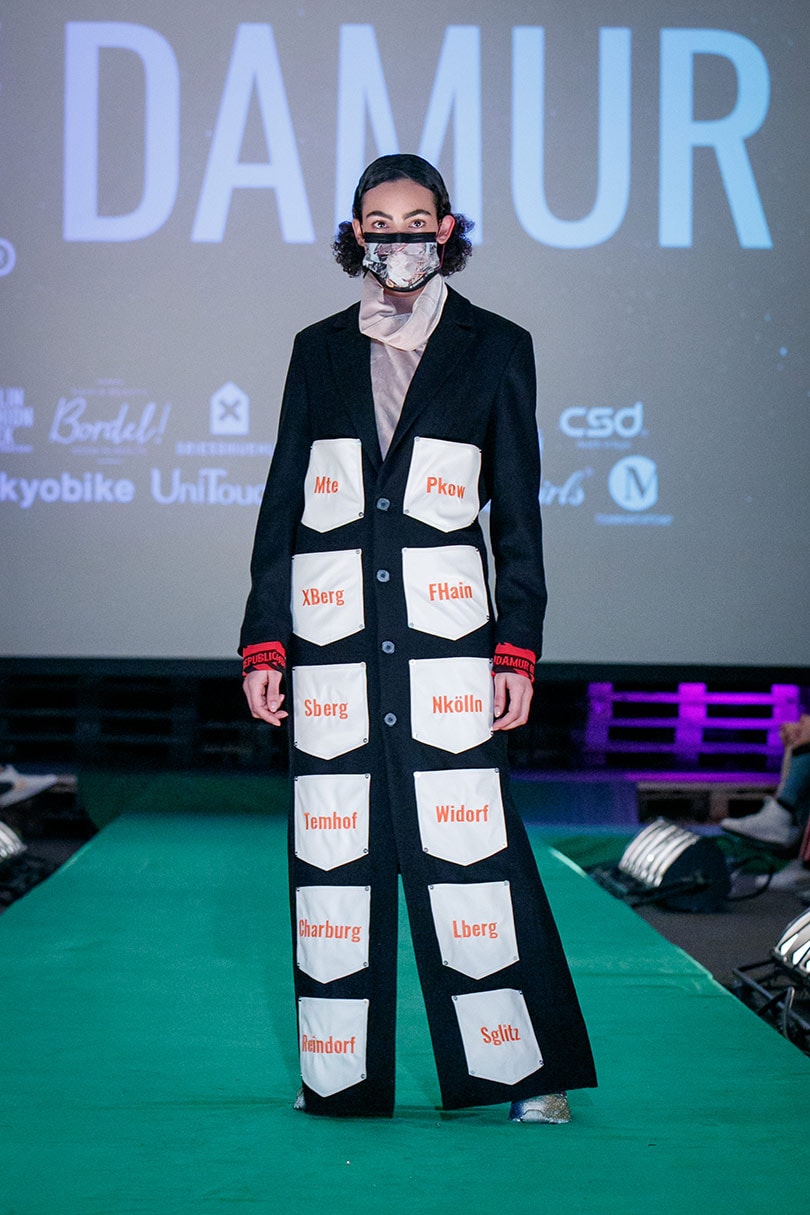 Already part of everyday wear in Asia and even becoming a fashion statement, surgical masks are still viewed as a novelty in the West; however, they have been making an appearance in Western subculture and streetwear. American rappers such as Ayo and Teo, 2 Chainz and Travis Scott have long incorporated masks to perform onstage while Virgil Abloh’s Off-White Diagonal Camouflage Mask retails for 68 US dollars. Atlanta-based stylist, Zoe Dupree was quoted in Billboard Magazine, "This is a new part of costuming, and you’ll see people doing new things with it. This is a trend that’s going to stay."

Most recently as K-pop cross overed into the mainstream worldwide, the record-breaking boy band, BTS, often don facemasks as part of their off-duty attire; streetwear-inspired medical masks are even beginning to grace Amsterdam’s notable concert venues such as Melkweg during K-pop parties.