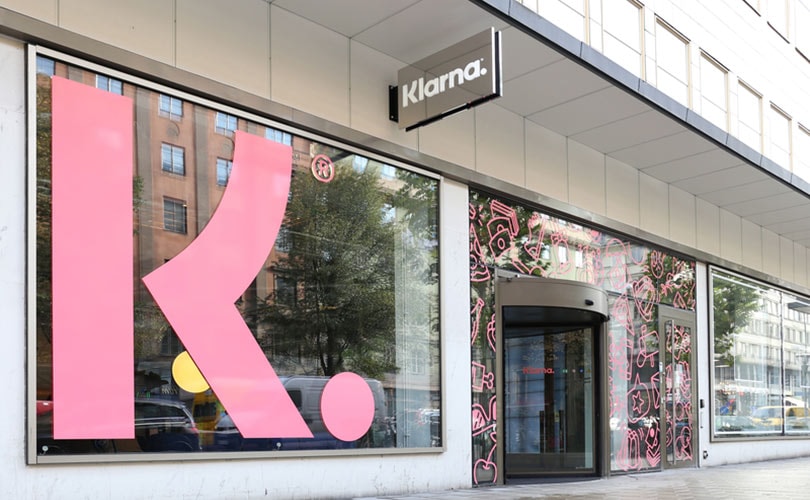 Those following the fashion industry closely have probably noticed the name Klarna popping up again and again among the headlines. The Swedish fintech company, which raised 460 million US dollars (approximately 368 million pounds) in equity funding in August, has announced a series of fashion partnerships over the last six months, including Toms, Man Repeller, Superdry, Quiz, Rue 21, and Abercrombie & Fitch, not to mention the expansion of its global contract with H&M. Additionally, Klarna became a patron of the British Fashion Council in April.

Klarna offers online shoppers two alternative check out options: either delaying the payment in 30 days, or paying in up to four installments without interest or fees. The merchant receives the payment straight away from Klarna, which handles the repayment directly with the customer from then on. Some 130,000 retailers work with Klarna around the world, including Asos, Topshop, Zara and Michael Kors. In the UK alone, over 5 million consumers have used the company’s services, of which 2.5 million have chosen the “buy now, pay later” option.

The company’s meteoric rise can be attributed to millennials and generation Zs, who have spent nearly half of their lives in a post-crash world. According to Deloitte’s 2019 Global Millennial Survey, millennials who entered the labor market around the recession experienced less economic growth in their first decade of work than any other generation. “They have lower real incomes and fewer assets than previous generations at comparable ages, as well as higher levels of debt,” says the report. In the United States, student debt is one of the most significant forces holding millennials down. Around 41 percent of US millennials hold a student debt, as per a 2015 Pew report. The graduating class of 2018 owed over 29,000 US dollars in student loans -- more than ever before, according to the Institute for College Access and Success. That may explain why 60 percent of American millennials do not own a single credit card, according to a recent Fed survey. 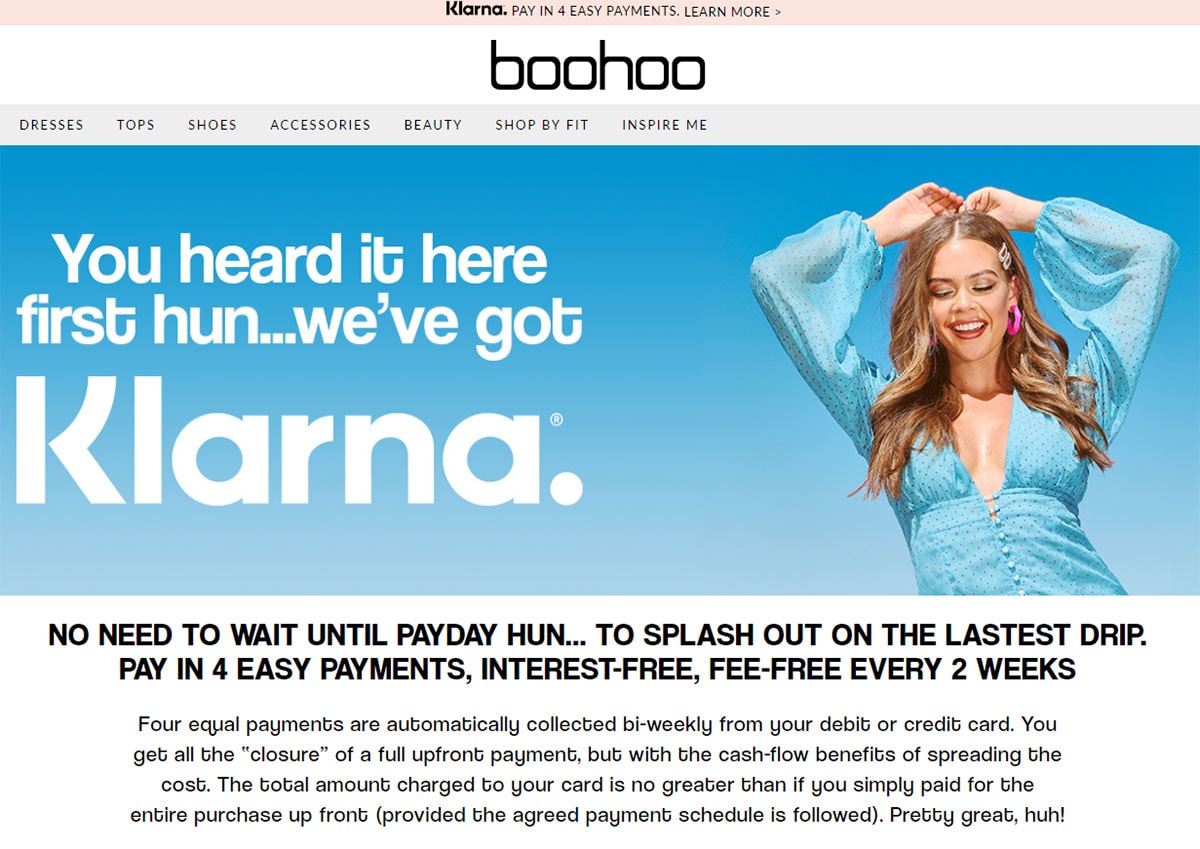 Although Klarna works with retailers from several different categories, fashion was key to its initial growth strategy and, as the recent stream of new partnerships demonstrates, it will continue to be a core market for the fintech. According to Luke Griffiths, General Manager at Klarna UK, the “buy now, pay later” option is of particular interest to fashion shoppers, as it allows them to purchase a garment online in different sizes and only keep the one that fits, without compromising funds in their bank account. “If they decide to return an item, they’re instantly able to shop again because they actually haven’t paid anything yet,” he explained in a phone interview with FashionUnited.

As a result, conversion rates tend to rise: the possibility to delay the payment makes consumers more inclined to check out. Some even feel encouraged to spend more. “A pay-later Klarna customer typically spends between 10 and 20 percent more than a credit card customer. Because of the convenience of the method, they’re more inclined to return to the retailer as well: we see a 20 percent increase in purchase frequency on average,” said Griffiths.

For him, the rising popularity of alternative payment options is not only indicative of millennials’ meager earnings but also of the consumer demand for faster, more convenient ways to check out. “Payment options haven’t changed much in the last 40 years. When I joined the company 3.5 years ago, there were only cards and PayPal. We don’t really think of ourselves as a payment business, we actually just want to offer a really nice experience for the customer. If you’re using the pay later option, for instance, you literally just type in your email address, date of birth and postcode. You don’t have to fiddle around with card numbers or be redirected away from the merchant’s site, it’s all really quick".

Although both “buy now, pay later” and paying by installments are gaining traction in the e-commerce landscape, Griffiths says customers tend to gravitate towards one of the two options depending on the brand’s profile. “If the basket value is relatively low, say 45 pounds (56 US dollars), then the pay later option works really well. In the case of merchants with a higher average basket size, such as Michael Kors or Superdry, most consumers opt for installments”.

What if the customer does not pay Klarna back, though? “We don’t accept everybody when they attempt to use our payment methods,” Griffiths clarified. “We’re a risk engine. We make a risk-based decision on whether the consumer can afford the transaction, when they’re likely to repay us, and if there have been other issues recently.”

As for the future, Klarna wants to spread its tentacles far and wide, including brick and mortar retail. “All of the challenges retailers face in the ecommerce and mobile commerce environments exist in physical retail as well. Removing friction, making it easier for the customer to check out. Those are conversations we’re having with retailers like H&M and JD Sports: how can we establish a similar check out experience in the physical retail environment? How can the customer check out without having to go the cash desk? It doesn’t necessarily involve having iPads or screens in store, sometimes that will be the case but we can also enable the customer to pay later or pay by installments through their phone. We can encourage them to engage with the retailer’s app in store,” said Griffiths. 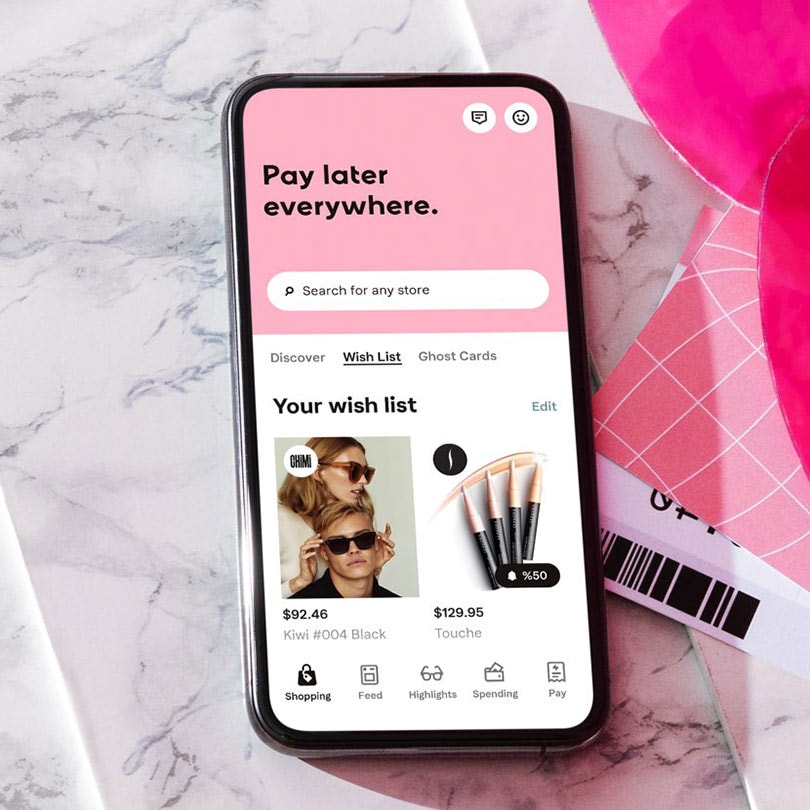 The company is also looking to improve and expand its own app, where consumers manage their repayments, with the aim to drive them back to their favorite retailers and continue shopping. Additionally, Klarna is working on a physical card that consumers would be able to use on the high street, regardless of whether the retailer is a Klarna partner or not. Griffiths: “It’s not a credit card but a payment card which will basically allow the consumer to have the same experience and manage the payment type. They can just use the card to shop at any retailer and then, post-purchase, choose how they want to manage the repayment of that particular transaction.” The card will be launched in the UK soon.

Last but not least, Klarna is developing a service called Instant Shopping, a “buy now with Klarna” button that retailers will be able to use across different channels, including email marketing, Instagram posts and digital ads. “There is a lot going on”, celebrated Griffiths. 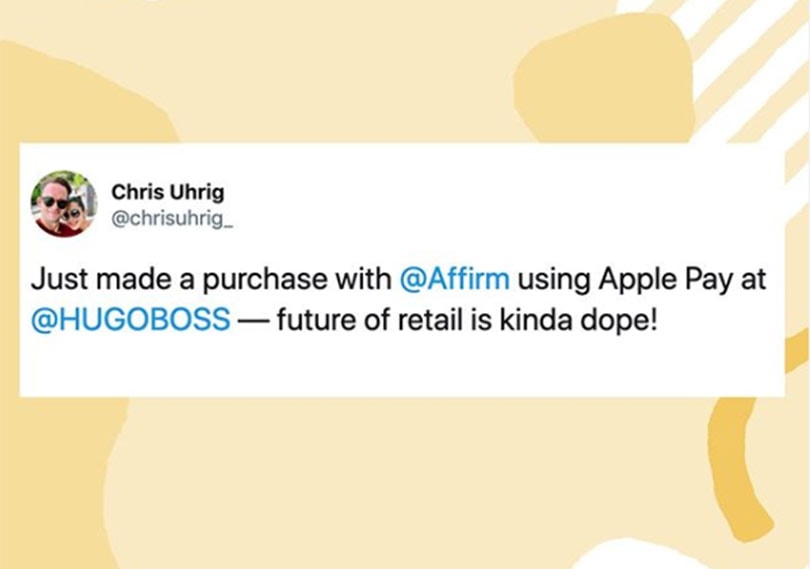 Alternative payment options: a promising market to be explored by more fintechs

Although Klarna is the biggest name that comes to mind when it comes to alternative payment options, the market for “buy now, pay later” and payment-by-installment providers is so promising several competitors are appearing. Affirm, a San Francisco-based company founded in 2012 with offices in San Francisco, Pittsburgh and New York, is one of them. Valued at 2.9 billion US dollars, the American fintech has recently raised 300 million US dollars in a Series F funding round led by Thrive Capital, bringing the total value raised to 800 million US dollars. Its fashion partners include Warby Parker, The RealReal, Tradesy, Good American, Tamara Mellon, La Garconne, StockX, and Pat McGrath Labs.

Similarly to Klarna, Affirm claims its merchant partners see a 20 percent increase in sales as well as a 92 percent lift in average order value. “Offering an alternative payment option has become a competitive advantage for merchants, especially when it comes to larger purchases that require time and consideration,” said an Affirm spokesperson who prefers to remain unnamed, in an email to FashionUnited.

The company attributes its growth to several factors, including consumers growing wary of traditional forms of credit. “American consumers are looking for alternative methods that are completely transparent and can help them budget and be more mindful of their spending. These concerns come at a time when they collectively face massive credit card debt totaling more than 1 trillion US dollars,” said the spokesperson. “Our customers find it refreshing that we operate with a set of values that ensures they’ll never be charged late or hidden fees, steering away from fine print”.

Commenting on the emergence of competitors, Klarna’s Luke Griffiths said it “demonstrates the consumer demand for more choice, more options”.

Paying by installments: nothing new in Latin America

Paying fashion purchases by installments is considered a novelty in Europe and the United States, but Latin Americans have been doing that since the 1950s. The practice is commonplace in Argentina, Mexico and Brazil, countries with an unstable economy where a significant part of the population has a low income.

Offering the possibility to spread the payment in a series of installments of low value was the way the brick and mortar retailers of the time found to convince consumers to spend money on items considered frivolous, such as fashion. It also provided low income working families with access to higher price items such as electronics, which they couldn’t afford otherwise. Additionally, the method was a guaranteed way to increase consumer loyalty, as customers had to return to the store every month to pay their installments, possibly being lured into buying something more each time.

The practice did not disappear with the emergence of ecommerce. Now, installments are operated by credit card companies, leading fashion retailers such as Brazilian giants Lojas Renner and Lojas Marisa to operate a financial branch as well. Customers can get a credit card directly from the fashion store, enabling them to pay for their purchases by installments. In Brazil, 54 percent of all purchases made online in 2017 were paid by installments through a credit card, according to Ebanx.

Carol Sandler, editor-in-chief of Finanças Femininas, one of the country’s most-visited websites on personal finances, thinks the increased access to payment by installment options in the US and Europe is not a good development. “They should look at what happens in Brazil. These alternative payment options have given access to certain products to millions of people, but they also contributed to the sky high level of indebtment in the country. It creates the illusion that we don’t need to have money to buy the things we want right away,” she warned in a phone conversation with FashionUnited. “Most consumers tend to spend more than they normally would when they’re offered the possibility to pay by installments because they don’t look at the total value they’ll be spending, but rather at the value of each installment”.

“It’s one thing to take on installments in the case of a large, emergency purchase. An entirely different thing is to develop the habit of buying fashion in this manner. That can be quite dangerous, especially if you take on several installments with different providers and retailers, compromising your income over a long period of time.”