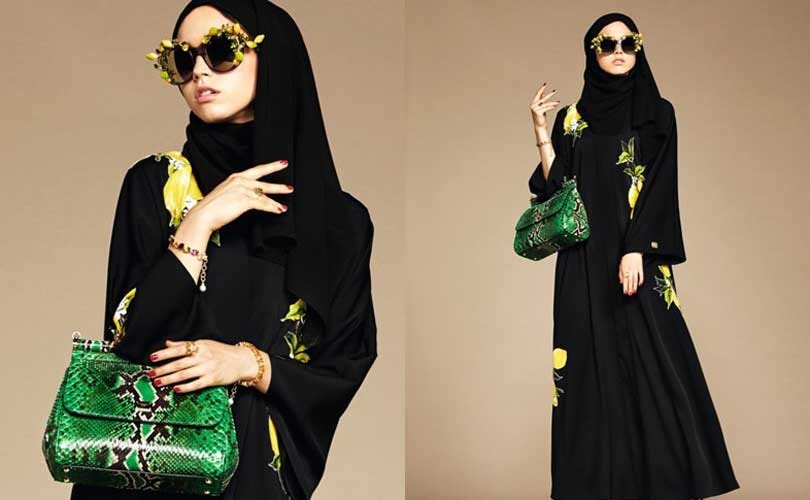 Italian design duo Dolce & Gabbana have unveiled their first hijab collection, created especially for the Muslim community. Muslim women cover their heads and arms as a dress code prescribed by Islam, however their fashion needs have been largely neglected by brands.

Muslims make up 22 percent of the world’s population and 5 percent of the UK’s, however neither the high street or luxury designers caters to their dress codes.

Dolce & Gabbana this week released its debut collection of hijabs and abayas, perhaps signalling change in recognising a Muslim woman's dress code. The collection debuted on Style.com/Arabia and features a range of veils and outer garments in a neutral colour palette described as “luxe black and sandy beige”.

The collection of abayas and sheylas features lace, embroidery and prints

Stefano Gabbana, who previewed the range via his Instagram account this morning, hinted at the collection in an interview with English-language Middle Eastern newspaper The National in July last year. “I’m really fascinated with the Middle East and we’ve just completed a prêt-a-porter collection of abayas and sheylas,” he said, “Pieces have some lace, embroidery and some prints – but not too much. They will be available in the UAE this October.”

Western brands are increasing their presence in the Middle East, something illustrated by Chanel’s decision to present its Cruise 2015 collection in Dubai last year. And this isn’t specific to the Arab world: these brands are also catering more to the needs of Muslim shoppers around the globe. Last year Uniqlo released its debut hijab range and H&M cast a Muslim model, Mariah Idrissi, wearing the veil in its ‘Close the Loop’ campaign, showing a shift in the high street’s attitudes to inclusivity.