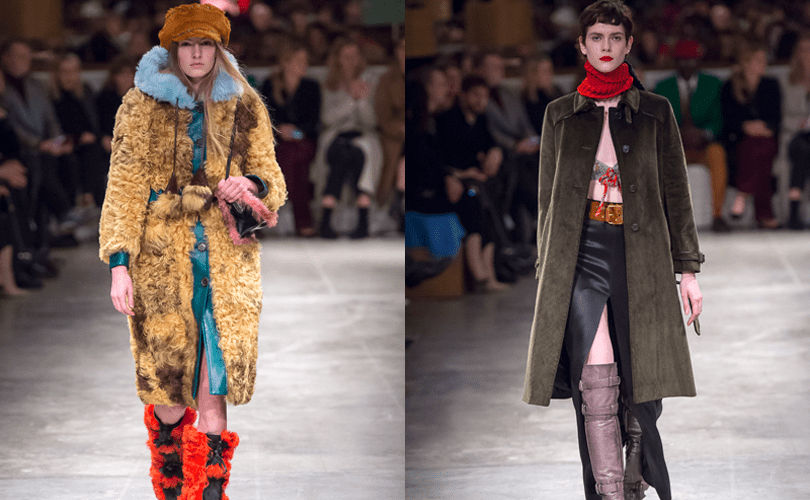 Prada rang in its autumn-winter 2017 collection in Milan Thursday to cheers and wild applause, triumphing with a feminine runway which revived the cardigan and elevated the crochet bra to stardom. The show, held in the Italian luxury brand's historic headquarters in the northern Italian city, was set in the recreated bedroom of a teenage girl -- clearly one obsessed with everything Prada.

Fashionistas from the world over perched on beds decked out in flowery sheets and colourful fur bedspreads next to walls plastered with Prada stickers and posters advertising the latest collection. Miuccia Prada looked overwhelmed at the rapturous welcome given to a show which featured corduroy suits, trailing crochet scarves, embroidered mohair skirts and the humble cardigan given a lift with beaded patterns.

Backstage, she said the collection was an examination of modern-day femininity through the classic "weapons of seduction" -- furs, feathers, underwear -- which have remained unchanged despite feminism's progress. Models ditched shirts to wear their bras proudly under unbuttoned jackets, and this was underwear which could have been crocheted for them by a doting -- if fairly open-minded -- grandma.

The crowd erupted for a sensational red frock -- this season's little black number -- modelled by Lindsey Wixson. Hats were Gavroche artist caps or Eskimo-style hoods which ruffled in the breeze as the models strutted their stuff. The hoods, pompoms swinging, were delightfully matched with slinky beaded dresses in pinks or greens.

Autumnal colours dominated, though flowers were still in bloom on tweed pieces, with jumpers and skirts lifted with a panel of roses or falling petals. There will be no worries about cold snaps for the Prada girl, thanks to the season's fabulously furry boots worn to the knee, some featuring the line's pompoms. And for the home? A pair of fur-rimmed slippers. Skirts were fun, kicking out at the mid-calf hem in a ruffle that was split at the back to show bare legs. Coats and jackets sported short capes in fur in startling blues, pinks or oranges.

The collection's rave reception will be a boost for the luxury Italian fashion house, which was hit by a slump in revenues in 2016 after struggling to recover from the downturn in global luxury spending. (AFP)