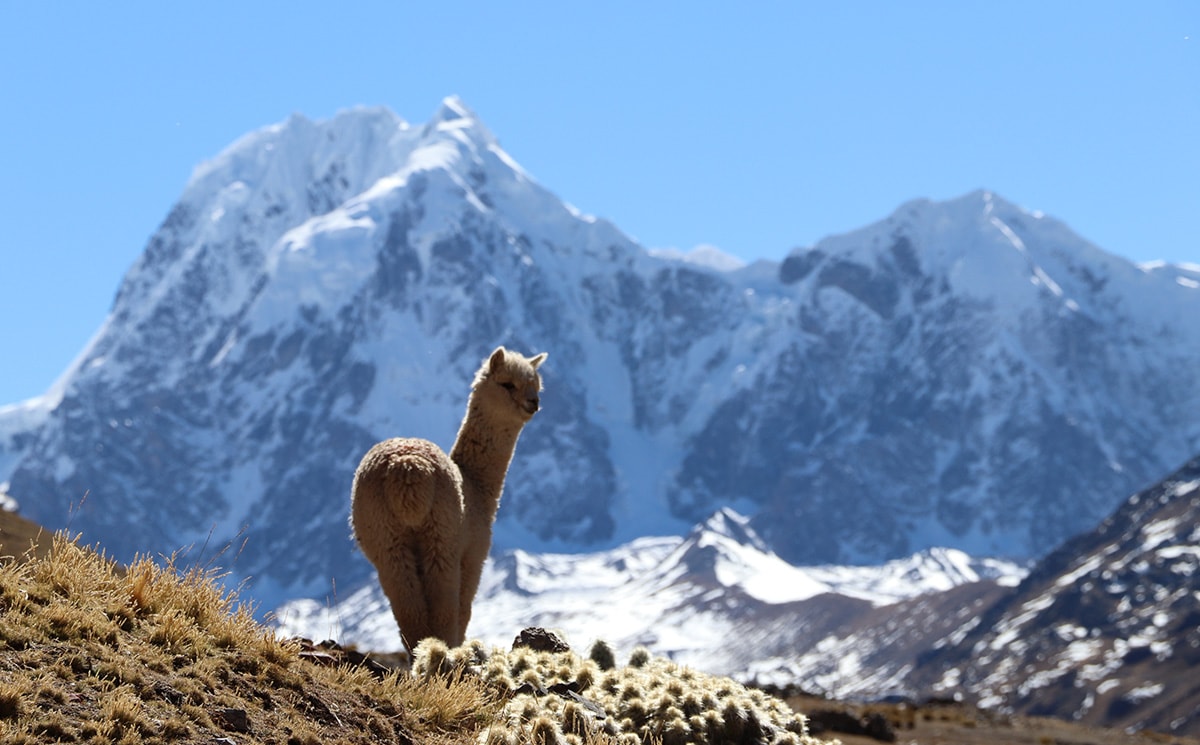 This is the incredible Andean worldview behind the alpaca

The history of this noble natural fibre is linked with the mythical universe of the Incas.

"I was born surrounded by alpacas. I’ve been an alpaca farmer all my life - says Andrés Choqueluque, president of the Peruvian Society of Registered Alpacas of Cusco (SPAR Cusco) - and I know a great deal about the relationship between these animals and the Andean worldview".

Andrés takes the call from Tocsaccota, in the heights of Marangani, the province of Canchis, and is ready to talk about how alpacas and human beings are linked by nature. "Alpaca are sweet little animals that form part of a life cycle where everything is united", he says without hesitation.
His words merit an explanation.

It turns out that the farmers see the world as a great fabric, where each element is related to one other through reciprocal pairs. "Inti (or the Sun God) offers us his light. Then the grass grows. This in turn feeds the alpacas, which provide us with their fibre for clothes".

In the sierra, the alpaca is considered a member of the family. If it gets sick, everyone suffers. Hence the care that the producers take during breeding and shearing.
Since 2014, PROMPERÚ has been promoting this sustainable and eco-friendly way of preserving alpaca fibre through the Alpaca del Perú industry brand, working side by side with hundreds of Andean communities.

There is a little known legend behind the origin of alpacas. It is believed they come from the foam of water. The ancestors of Choqueluque say that the Apu Jaucara was angry with his daughter, the ñusta (princess) Kirma, because she wanted to live with a handsome young man who had made her pregnant.

To appease her father's anger, the ñusta came up with the idea of knitting a giant poncho, measuring 100 km wide, using the foam of the water to sculpt some beautiful animals called alpacas, to which she gave a breath of life. She used this beautiful fibre to make the blissful garment.

However, it seems that it was too late, because Kirma's father sent his daughter to be looked after by his brother, the Apu Ausangate. Upon learning this, the young suitor went after his beloved, but the Apu Jaucara turned him into a stone statue, while he turned his daughter into a mountain: the famous Winikunka, or Rainbow Mountain, located on the road to Ausangate.
"If you look, the mountain has the colours of the rainbow, which are those of a single woman", says Choqueluque. Whether it is truth or fiction, the legend certainly shows us how this noble fibre, which is now on display in shop windows all over world, links us with the Inca worldview.

In Tonsaccota, the farmers have about 200 hectares of land for the breeding and production of alpaca fibre. Marketing is not all it could be at present, but Andrés is sure that, with perseverance, better times will come.

The guardian of the heights

Kalmex Ramos also grew up surrounded by alpacas, llamas and vicuñas, very close to the sky. He was born in the rural community of San Pedro de Racco, in the district of Simón Bolívar, in the Pasco region. At that altitude -4425 m above sea level - only the condor, man and the alpacas survive, because the temperature drops to -10° C.

From a very young age, Kalmex earned a living through driving cattle and from the production of alpaca fibre together with his family. He was also able to graduate as a zootechnical engineer, and learned the secrets of insemination and the genetic improvement of livestock. Today he is the head of SPAR Pasco.

"The first memory I have of hugging an alpaca is at the Andean branding festival or carnival, which is when they put ribbons on the alpacas. The alpaca is like our brother, it's just another member of the household", he agrees.

According to Kalmex, in the past, the western world taught us to separate the elements of nature, when it is a matter of seeing the ecosystem as a unified whole.
"We don't divide man and animals, our animals also have feelings", he says. His grandparents say that one day a terrible famine struck the Earth. Then the Taita Inti created animals, among them the alpaca, for the well-being of men.

The law of gratitude

"Breeding alpacas is a reciprocal matter. When the crop year starts, for example, we make an offering to the earth, we put two glasses of wines on a table, two candles, two apples, two oranges, all in pairs, depicting the balance in which we live, because we are all related".

It is not an offering to Pachamama, however, but an act of gratitude. Like when you go to visit someone's house. You don't have to get there empty-handed. That's how it is in the Andes.
The same applies with animals. "San Pedro de Racco is the best in the world for llamas, but if I were to only work on raising llamas, it would be a mistake. Grazing must be complementary. The high pasture is eaten by the llamas, while the low pasture is for sheep".

Small animals leave manure for the growth of new pastures that will serve as food for their successors. This is how the universe is interwoven as a whole and this is how the life cycle is renewed every morning.

And who better than the farmers to give us these lessons?
"We are [all modesty aside] the best caretakers of the ecosystem. If not, the moon, the wind and the Earth, would have problems", says Kalmex.
San Pedro de Racco is home to 350 farmers and has 200 members. There are 5,000 alpacas, which produce about 25,000 pounds of the best quality fibre per year. There could be more, explains Kalmex, if the principle of reciprocity was practiced beyond the mountains.
“We don't export, we supply the fibre to production centres. That is why we believe in the partnership that the State promotes with peasant communities", the leader points out. Wise words.

PROMPERU (the Exports and Tourism Promotion Board of Peru) has the pleasure to invite you to 'PERU MODA - VIRTUAL EDITION', where you will have the opportunity to e-meet the best Peruvian apparel manufacturers.

Get ready to discover the Peruvian Fashion Industry!

Meetings will be managed by yourself and you will be able to schedule at your preferred time & dates during the whole October month, this is thanks to the matchmaking platform specially created for this event.

Participation is free of charge!