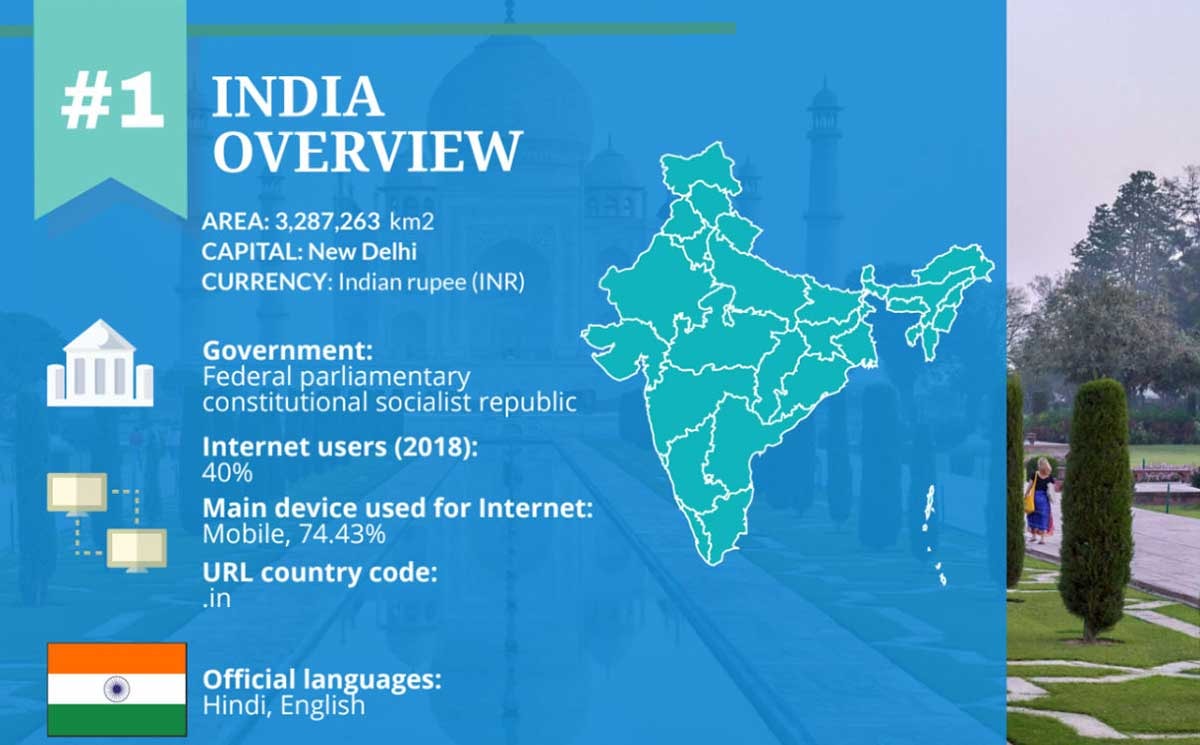 Country report: e-commerce is booming in India but challenges persist

Not many international brands and retailers could afford to ignore India, the world’s most populous country with 1.37 billion people, second only to China, and catching up fast. Given that 41 percent of that enormous population is using the internet, that is a whopping 562 million people or potential customers. The e-commerce market is vast yet tricky and should be navigated carefully to avoid the wrong approach. The just released “Ecommerce Report: India 2019” by the Ecommerce Foundation delves into the B2C e-commerce Indian market, including connectivity, digital readiness, and device usage.

First, the good news: The Indian GDP is expected to reach 2.59 trillion US dollars in 2019, growing at a rate of 6.63 percent, and B2C e-commerce turnover is expected to reach more than 32 billion US dollars. But, India still has a long way to go - literally - in terms of infrastructure and logistics: “India appears to be lacking in all e-commerce indices. It ranks 44th in the Logistical Performance Index, 77th in the Ease of Doing Business Index and 96th in the E-Government Development Index. Additionally, it appears Internet Inclusivity is a weak point for India, taking the 47th position in the rankings,” finds the report.

India has some ways to go in terms of logistics, infrastructure, ease of doing business

The Internet Inclusivity Index takes the capacity to access the internet into account as well as the affordability to do so, the available internet infrastructure and the existence and extent of local language content. Of 86 countries, India ranks 47th. A high Ease of Doing Business ranking means that the regulatory environment is more favorable for the starting and operation of a local firm while a high score on the UN’s E-Government Development Index include “concurrent past and present investments in telecommunication, human capital and the provision of online services”. India ranks 96th among almost 200 countries, having climbed up from the 118th rank in 2014. The World Bank´s Logistical Performance Index compares trade logistics across 160 countries.

International brands and retailers should also know that internet usage in India is greatly linked to mobile phones: With Indians accessing the internet 80 percent of the time through their mobile phones, they do so only 20 percent of the time through a desktop computer according to web analytics firm StatCounter. The reasons are affordability, computer penetration being much lower than cell phone penetration, and ease of access: While a mobile phone can be carried around and accessed anytime, anywhere there is a network, PCs do not offer that flexibility. Thus, e-commerce in India means offering mobile friendly options and websites to buy products. No wonder then that mobiles and mobile accessories are by far the most purchased category. 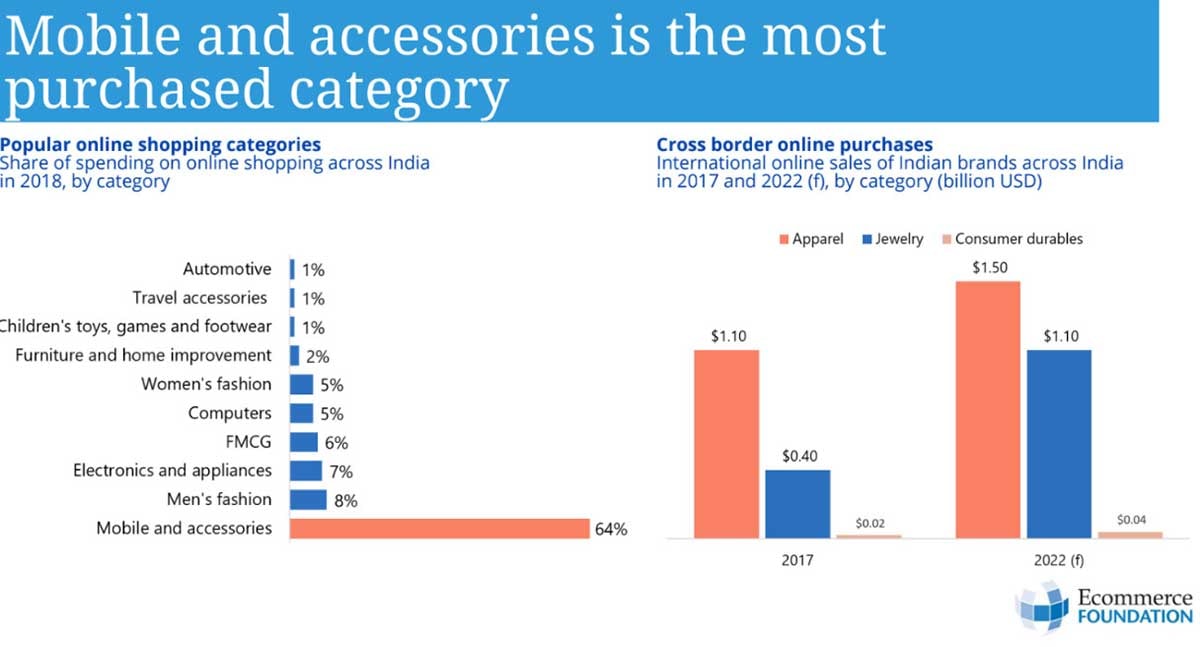 “Urban India has developed a very fast lifestyle and now faces infrastructural challenges when it comes to road traffic and travel times from one corner of the city to another. Yet consumers today want more choices at their fingertips and everything faster at their doorsteps. The 'near me' concept is catching up with consumers, with more and more large and small players entering the 'hyperlocal' space,” says digital commerce expert Kashyap Mehta, APJ retail lead for SAP customer experience.

Anyone doing business online in India should also keep in mind that those accessing the internet are not always savvy in English; in fact, as the report found, 396 million non-English internet users are expected to use chat applications in 2021, that is more than 70 percent of all Indian internet users. Brands and retailers should thus get ready to address potential customers in the language they are comfortable in, be it Hindi, Tamil, Gujarati, Kannada, Telugu, Malayalam, Bengali or Marathi. 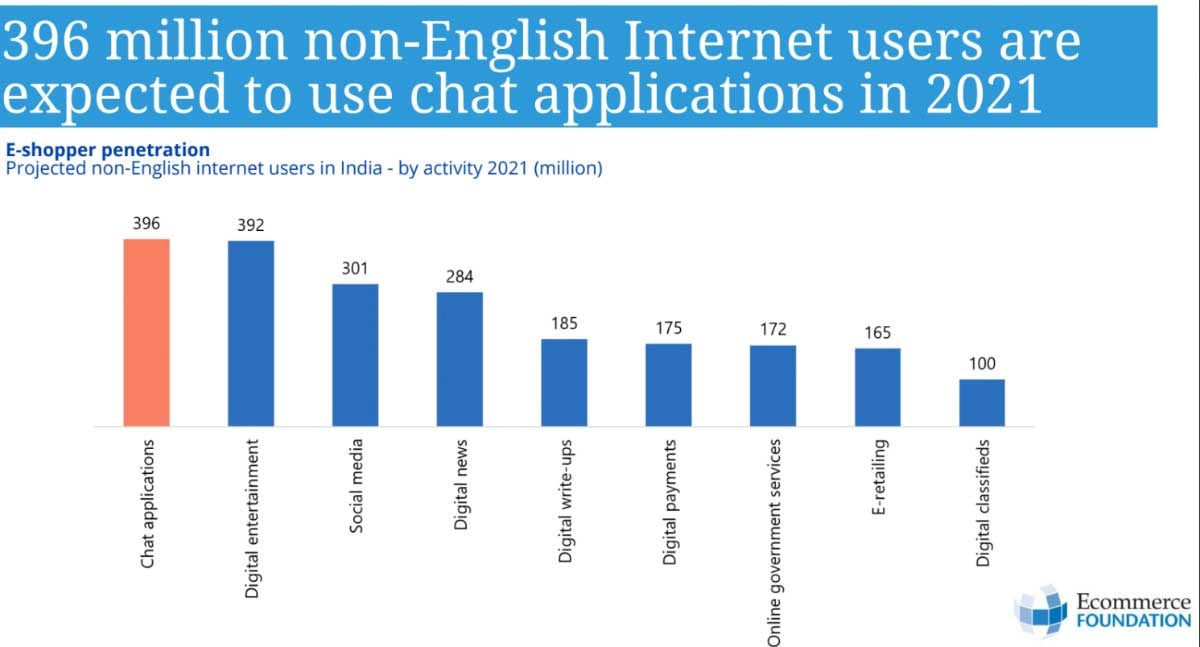 E-wallets will continue to grow as most popular payment methods

“India's payment acceptance infrastructure has been significantly upgraded, with many new merchants accepting digital payments in both online and offline channels. There is a huge drive from the government side to push consumers to start using the digital payments also as one of their preferred payment modes,” confirms Mehta.

When it comes to men and women, there is a clear gender disparity in India in terms of internet usage. “In 2018, the distribution of online shoppers was higher for male (71%), while for women was 29 percent. Moreover, 50 percent of e-shoppers always check product reviews, 35 percent sometimes check them and 10 percent only check reviews for expensive or non-branded products,” claims the report. 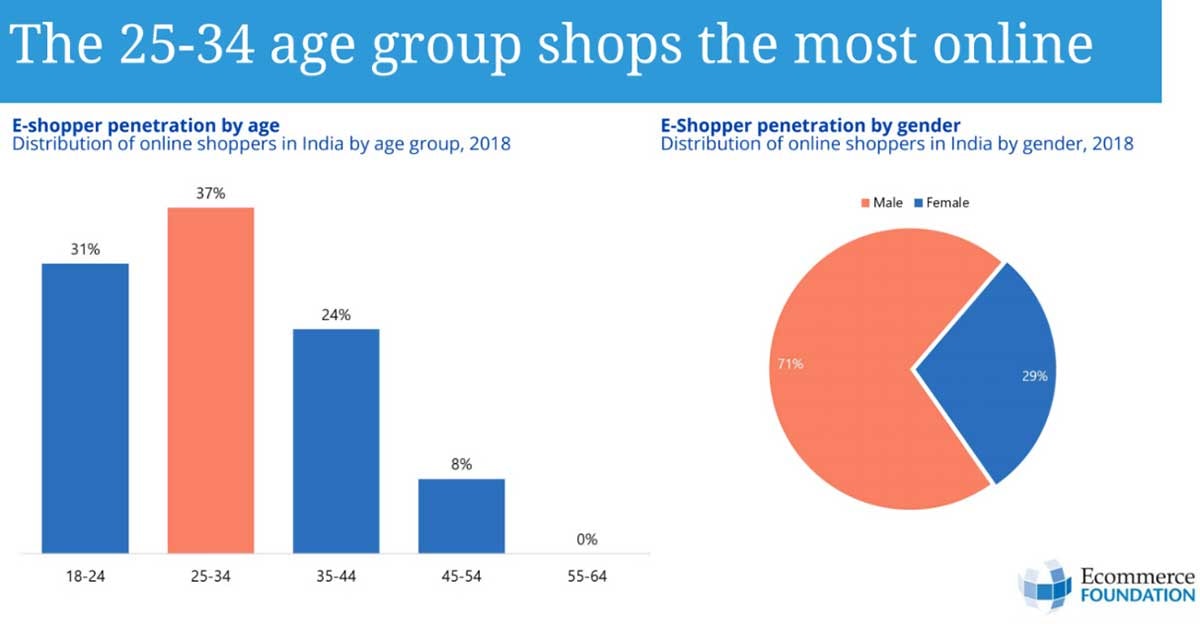 The line between online and offline is getting blurred

Asked about the most exciting developments taking place in the e-commerce space in India today, Mehta mentions the rise of 'phygital' commerce: “Today’s customer is channel-less and seeks connected experience and connected journeys anytime, anywhere, anyplace. To address this, many Indian retailers are increasingly going ‘phygital’ (a combination of digital and classic retail). This is now being driven predominantly by brands operating in the fashion and lifestyle category… The line between online and offline is getting blurred as players are realizing that a complete 360 degree shopping experience can be provided by bringing the best of both worlds”.

The full “Ecommerce Report: India 2019” is available at the Ecommerce Foundation website (ecommercefoundation.org).